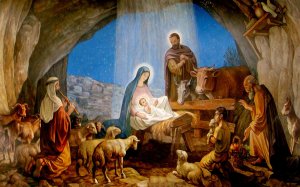 A terrible blow to families and psychology happened in the 1980’s when the word “dysfunctional” became vogue.  Lots of  books sold and lots of talk, especially in our family on why we were this word.

Television again doesn’t imitate art but rather influences and often distorts us.  We fall for it.  As adults the five of us kids realized that there was nothing dysfunctional about our family.  Our lives, assembled by mom and dad, formed what our family turned out to be.  Nothing wrong or good about it, it was our family with all its quirks and qualms, some unique and others not, that any family can admit.  We weren’t the Cleavors, our mom didn’t own a pair of pearls and if she did she wouldn’t have vacuumed with them on.

The irony (note the correct of the word) is we honor the “Holy Family” each year and even kneel before them in their holiness.  Those characters that comprise the great historical backdrop to our salvation created a family and circle for our savior.  Quirky and qualms?  Just read on…

Test Your “Holy Family” Assortment of Family & Friends
A crazy cousin who dresses weird and eats even weirdier.
A pregnant, unwed young girl who has no viable skills outside the home but looks great in blue.
A silent-type husband-to-be who wants to get rid of the pregnant young girl and move on.
An old married lady who discovers she’s with child and, if that’s not enough, the kid keeps “leaping” in her womb; presumably with “joy.”
Angles coming and going and making grand announcements that no one understands but always prefaces them with “Do not be afraid,” as though that helps.
A mute uncle who has lots to say but is unable to say them.
A government official that wants you dead before you’ve even born.
An old lady who prays all day and hopes she doesn’t die before seeing you.
Shepherds are heard yelling at midnight in the fields something that sounds like G-l-o-r-i-a, before it became a hit 1960’s record.

Just in case you think that you’re family is beyond the norm of normal, this is the playbill for divine intervention.  They are John, Mary, Joseph, Elizabeth, Multitudes of angels, Zechariah, Herod, among the shepherds is Sam Shepherd, Cybil Shepherd and Alan Shepherd.

Now picture all these people around a Christmas dinner table, carrying on and trying to share opinions, thoughts or words (except in the case of the mute uncle.)

That’s the wonder of the Christmas season. The awe of this season is what each person contributes to the story. To leave out any of these characters is to miss an important element of the dramatic story of God breaking into history. All accomplished through these un-dysfunctional people; all leading to a new member of the family.
Merry Christmas.

A Roman Catholic priest since 1980 and member of the Society of the Divine Savior (Salvatorians). www.Salvatorians.com. Serving as Administrator, St. Catherine of Alexandria, 8661 N. 76 Place, Milwaukee, WI. 53223. www.stcatherinemke.org. Six books on the Catholic church and U.S. culture are available on Amazon.com.
View all posts by Rev. Joe Jagodensky, SDS. →
This entry was posted in Christmas, Spirituality. Bookmark the permalink.