He Lifted Him Up 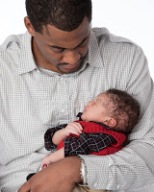 “Porch night” as usual for me as the weather warms and the guy across the street exits holding his tiny son.  Like a Chinese vase, he holds him close to himself.  No carriage or stroller for this masculine guy who’s already worked his day but now comes home to his four children and especially this breakable Chinese, grace of a boy.

In the past I’ve seen him do the obligatory football throws with his two other sons.  (He has a good arm.)  His daughter seems to be in the background to my porching eyes.

Tonight he slowly strolls out with the youngest held near to him.  A half block away he easily lifts him up and places him securely on his shoulders.  The youngster’s communication is only a point of a finger and some mumbles that I can’t hear and I’m sure his father can’t understand.  The youngest is pointing to some unknown thing telling it he sees it as a part of his growing world, a world that will one day be his. After his father and mother dies.  He is telling the world that the world will soon be his, lock, stock and the proverbial barrel.

This young one at this early age will never remember the walk around the block on his big dad’s shoulders and resting on his neck, surveying what only a tall person sees.

But I hope that he will unconsciously never lose the depth and wealth and height and breathe that this world holds when he lives his life on the ground.

A Roman Catholic priest since 1980 and a member of the Society of the Divine Savior (Salvatorians). www.Salvatorians.com. Six books on Amazon.com.
View all posts by Rev. Joe Jagodensky, SDS. →
This entry was posted in Growing Up, Spirituality. Bookmark the permalink.