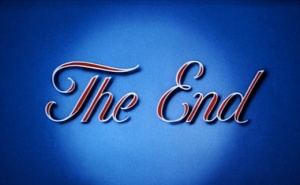 Those two words appear on the screen but you still have some popcorn left so you watch those rolling names that usually appear in your back as you leave the theater.  Except this time the rolls include everyone you’ve known since the doctor announced your gender to the awaiting world and your sweating but relieved mother.  The doctor assures mom that all five are where they are supposed to be but now on the black screen those numbers have exaggerated by the number of your lived years.

Kindergarten teacher, the neighborhood grocer check out lady; including relatives, loved  or tolerated twice a year.  You finally know what a “best boy” does in a movie when you see a familiar name attached to the title.  The movie’s crew caterer is obvious to you all these years later since it was that sweating but relieved woman in the bed with you.  The moving list continues as you munch, containing every grade school friend and the playground bully and moves onward as high as you went in education.  Neighbors, co-workers are all listed as you attempt to place the name against your forgetful memory which is not easy since the list continues to move upward.

A tear is easily released into the remaining kernels as the names persist and you wonder how many people touched, brushed or enveloped your life.  In our minds the villains are the easiest to spot because they’ve lived within us the longest.  It’s the smaller names that test our memories – the man whose car you dented but smiled and said, “I’ll take care of it myself,” or that walk to your car carrying your child when the milk fell out and she quickly picked it up for you.  Those were nameless encounters whose names now appear on your rolling life.

You begin to wonder if you have enough popcorn to see till “the end” of these credits.  Credits.  That’s what they’re called in movie parlance.  They’ve been credited for making this feature film what it is but who spends time watching this roll roll upwards?  All the names are up there including the music that made this film, the film that it is.  Musical titles are always listed at the bottom of the roll but for me they’d appear before the stars names because much of my life is associated with music and the people I spent time around it.

Interestingly, you recall now that part of the movie was in black and white while the rest was in color.  “I wonder how that happened?” you say to yourself as the last of the popcorn is gone and the credits finally shown copyrights and steep fines for duplication.

You don’t mind because you know that the copyright is your imprint and the only fines rendered are your own because of a missed opportunities, second thoughts or hesitations that you’d love to duplicate now, if you but had the chance.

I remember a movie that begins with the statement, “It may not have happened this way but this is the way I remember it.”  What a great way to remember the memories of our lives.  So what if we add a little extra to our past or shave and soften a little off of that experience.  After all, “it’s my memory.”

But to see your entire life slowly rolling upward showing those you have met either by circumstance, heritage, choice or random  – what a joy, what fulfillment, what satisfaction; again, what a joy to behold.  Not hold but to behold.

Your popcorn box is empty, the other theater folks didn’t stay for your closing credits but you stayed behind to relive – those with names, those without – all – who helped forge your life and who made you smile, laugh, tear and enjoy the last of your popcorn in an empty theater.

A Roman Catholic priest since 1980 and a member of the Society of the Divine Savior (Salvatorians). www.Salvatorians.com. Six books on the Catholic church and U.S. culture are available on Amazon.com.
View all posts by Rev. Joe Jagodensky, SDS. →
This entry was posted in Spirituality and tagged death. Bookmark the permalink.