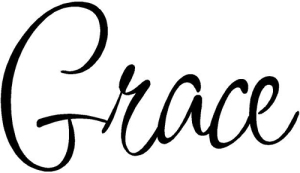 It’s tasteless, odorless; you cannot hold or grab it and it’s not for sale in spite of indulgences (one of the darker Catholic moments).

It’s the word that’s as beautiful to say as it is to experience.  Grace.  There’s something lovely both in the concept and in its reality.  Reality.  Who’s to say?  It may be profane to compare but grace is like pornography when the Supreme Court declared, “You know it when you see it.”

We could use the word “energy” but that’s not spiritual enough.  Grace is in a league of its own.  The Catholic Church, always a stickler for details, needed to divide this beautiful word into “sanctifying” and “actual.”  Why the distinction, I don’t know except I’m sure it kept bureaucrats busy for centuries trying to think up those two words.  The former is achieved through the seven sacraments and the latter just comes in doses when needed.

We say “Grace” before and after we eat, grateful for the food before us.  We ask God for it before an exam or the tenth job interview.  Parents seek its companionship for eighteen years, sometimes thirty years depending on the job market.

I don’t so much seek it but recognize its presence when it arrives.  I would describe grace as an extra portion of peace added to my already peaceful feeling living in the present time.  I guess the difference between “energy” and “grace” is that grace transcends the fleeting flight of feelings.  If grace were a feeling, it would be considered shallow instead of the hidden power it releases.

Did you ever have an ordinary meal with a friend but walk away knowing it was a “graced moment?”  Not planned or organized, the conversation just drifted into important matters that needed either to be said or listened to by one or both parties.  Then as a new week progresses that one “moment” continues to live within you until it no longer is a moment, it was grace.  St. Aquinas says, “grace builds upon grace.”  Of all the fancy statements I could have remembered from the seminary that simple statement has stayed with me.  So perhaps there is an energy in this grace stuff.

A simple time or experience of grace builds upon itself until it becomes a guiding light or pilot light that lights doubtful times, trying situations, a conflict of any kind becomes bearable or at least understood a little better because of this simple and beautiful word that gracefully graces our lives: grace.

A Roman Catholic priest since 1980 and member of the Society of the Divine Savior (Salvatorians). www.Salvatorians.com. Serving as Administrator, St. Catherine of Alexandria, 8661 N. 76 Place, Milwaukee, WI. 53223. www.stcatherinemke.org. Six books on the Catholic church and U.S. culture are available on Amazon.com.
View all posts by Rev. Joe Jagodensky, SDS. →
This entry was posted in Spirituality and tagged Grace. Bookmark the permalink.