The Unlikely Father of God 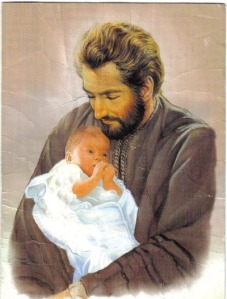 In our team meetings about who’d play the role, we’d never choose Joseph for the second most important role in salvation history.  Fellow employees would laugh at my suggestion of offering him the part.  They’d tell me to take a break and come back when I had a solid choice for this revered role.  It needs to be correct the first time because there is no second take on rolling off the role of Jesus’ earthly father.  “House of David” is the only thing our casting crew can agree upon.  The rest seems up for grabs.

But I did not need a break after all because finally the group gives in to choosing the humble guy, the quiet guy, the “character-actor” we’ve seen hundreds of times on TV and in movies but whose name we just can’t remember.  I guess we couldn’t upstage the second lead, Mary, with some famed person.  It wouldn’t be right.  The part had to go to the unassuming guy whose character can be whatever you want him to be, because of the little we know about him.

Mary has made up parents to complete her but we couldn’t even invent two folks to birth Joseph.  Ozzie & Harriet?  Rob and Laura?  Ralph & Alice?  Bob and Emily?  Ward and June?  Nope, no association to even solidify his Jewish roots was the necessary plant for the Son of God.

Historians tell us that there was no census, there was no need for one.  There was no flight to Egypt (can you even imagine traveling there on a donkey with no flyer miles!?)  Jesus probably was not lost in the temple either while his parents went shopping and somehow forgot they had a son.  (I’d understand if they had four kids but to misplace one?)

For me it’s the dreams that clinched the part for Joseph, with no last name either.  Like the Old Testament Joseph, the dreams are what makes him memorable and important to this age old story.  Dreams of caution, trust and guidance were heeded by New Testament Joe that protected and sheltered this small family as any father would provide.

He’s now abused and honored centuries later.  The abuse is burying him in some direction to get a quick sale on your home and the honor is he’s the one who had what the Church calls “a happy death,” if that’s even possible.  I guess with your Son and Mary at your bedside, the transition could be a little less painful.  March 19 is Joseph the Husband and May 1 is Joseph the Worker.  I’ve always honored March 19.  Work is too difficult but dreaming is always fruitful and fun.