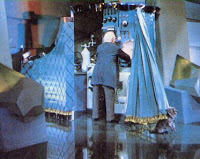 The mystic and mystery has finally arrived as the Catholic cardinals gather in that gloomy, cold chapel to produce one of their own to assume the wizard’s role.

It is the talk of the town for these days until a new pope is named and then suddenly these talkers return to different talk.  I have never heard so many silly questions of which I have no silly answer.  “How do they make white smoke?”  (Honest.)  “I just saw a TV special on the rebuilding of the chimney.”  “I heard the ballots are linked together on a string.”  “Why can’t a new pope be named ‘Peter’?’  “How do they know what name to choose?”  “I was told that cardinals change their handwriting to keep their vote private.”

So much commotion for a new someone that we will not listen to, read what he has to say or follow once he’s elected.  How does this happen?

Who said the Harry Potter series has ended!  The Catholic Church has more pomp with little impact and more circumstance, limited as it is, than any other organization in the world.  “Where do they sleep?” is another one.  “Do they stay inside there until one’s elected,” is another question as though I’ve taken a graduate course in Pope Election 101.  I smile, humor the questioner and just tell them that it really doesn’t matter.

We just love that curtain.  The movie, “Oz, the Great and Powerful” showed us how the original wizard came to be and many of those people are eating up news coverage about the Catholic’s new wizard.  I can tell you that it’s only just a curtain.

Move the curtain aside and you witness levers and gadgets that the wizard manipulates as though he was the head of the Catholic Church.  (Well, actually, he thinks he is.)  Pope doesn’t mean “leader” or “head,” it means “bridge.”

Mystic and mystery are both honored these days but sadly it is placed in the wrong container.  Take away the curtain and what do you have?  A group that votes for itself normally gets just a member of that group.  Liberals and progressives hold out for the “working of the Holy Spirit” type of guy but that only shows their agenda.  (What?  You’ve never been a part of a group that elects one of their own?)  Take away the smoke and mirrors and you have a self-appointed group gathering to elect one of their own to keep going what they started even it doesn’t work any longer.  Enron, anyone?

A Roman Catholic priest since 1980 and member of the Society of the Divine Savior (Salvatorians). www.Salvatorians.com. Serving as Administrator, St. Catherine of Alexandria, 8661 N. 76 Place, Milwaukee, WI. 53223. www.stcatherinemke.org. Six books on the Catholic church and U.S. culture are available on Amazon.com.
View all posts by Rev. Joe Jagodensky, SDS. →
This entry was posted in Spirituality and tagged electing a pope, Pope. Bookmark the permalink.