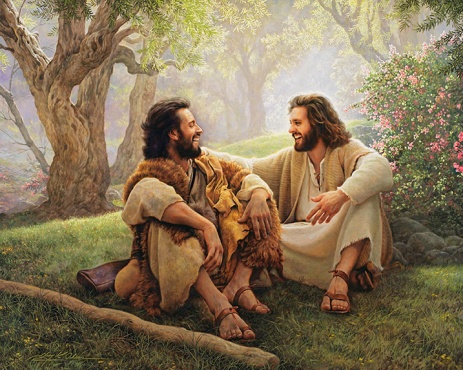 We know them respectfully as John the Baptist and Jesus Christ. We honor them whenever the Mass calls for it.

But these two people were, indeed, people. Just like you and me. Their mysterious lives slowly unfold, just like ours. What was life like for these two cousins, one born of the Holy Spirit and the other born of who could have been his great-grandmother? Jesus and John.

Or, as they referred to each other as young boys, “Johnny and JC.” Johnny didn’t know what the “C” stood for, but it kinda sounded cool coupled with the letter “J.”

Wouldn’t Mary have yelled out, “Jesus, go see what your cousin is up to. You’ve been in the house reading all day.” “Oh, okay mom, just let me finish this chapter,” Jesus would reply. He’d see John (or now “Johnny”) by the seashore building a sand castle. Johnny called it “his kingdom” and Jesus (or now “JC”) would say, “But it’s only built of sand and won’t last the test of time. Let’s go for a run.” And the two of them, now being twelve or thirteen years old, would try to outrace each other from nowhere to whenever they lost their young steam. They’d both fall down laughing and wondering where to get a drink of desert water.

They didn’t live really close to each other but kept in touch as often as possible. Jesus’ parents allowed Jesus to spend the summers at John’s mother house (even though she looked more like his great-grandmother). They’d exchange books they both enjoyed and talk about their future lives, as teenagers do. JC wanted to follow in his father’s footsteps as most boys during those times did. Johnny wasn’t sure what his father did for a living, but ever since his father got his voice back John thought that he also spoke well, and perhaps a public speaking future was in his job.

It may only be a coincidence but both admitted an itch inside themselves, but they couldn’t quite identify what it was. It was an itch that couldn’t be scratched. JC thought it was that he hadn’t traveled much. His mom told him about their trip to Egypt, but JC didn’t remember anything about it. Johnny loved to talk, sometimes too much, but he knew he needed a message; to talk about something important. JC told Johnny that he didn’t want to talk, he wanted to proclaim. JC thought about it and wondered if it was about a better life for humanity, a hopeful future not built on sand but by God. “Wow, JC” Johnny said, “You’ve been reading waaay too much.”

Since video games weren’t invented yet, JC and Johnny had plenty of time to enjoy nature, each other’s company instead of sitting on a couch staring at the television and holding the controls in your hands to kill everything that moved on the screen. One summer, Johnny taught JC how to swim, since Johnny was six months older. He almost lost JC a couple of times which would have changed our faith-filled history. After learning to swim, then JC’s walking on water would be a cinch years later. They both thought of each other as brothers more than cousins since both were the only child in their families. When Labor Day rolled around, JC return to rabbinical school and John, the same.

Around 27 or 28 years old, those childhood names changed to their real names as maturity set in. John knew that Jesus was right. His verb was not talking, it was proclaim. Jesus was beginning to have signals of his own that taking over his father’s business wasn’t the right father. It was the work of the capitol “F” father.

John looked at Jesus’ feet for over twenty years and knew Jesus needed to put his own sandals on, John couldn’t do it. John could only tell us, I mean, proclaim it about him. John welcomed many into a kingdom not made of sand, but he just had water. Jesus had the Holy Spirit.

But the Spirit was within John as well, beginning with his great-grandmother’s birth to losing his head over his best friend, his cousin, his brother. The destiny of Jesus is well known as well.

They’re both in heaven now because they did their job as we must do ours. But there’s also fun up there. Now, it’s back to “Johnny” and “JC” because that’s how they loved each other.

A Roman Catholic priest since 1980 and member of the Society of the Divine Savior (Salvatorians). www.Salvatorians.com. Serving as Administrator, St. Catherine of Alexandria, 8661 N. 76 Place, Milwaukee, WI. 53223. www.stcatherinemke.org. Six books on the Catholic church and U.S. culture are available on Amazon.com.
View all posts by Rev. Joe Jagodensky, SDS. →
This entry was posted in Baptism, Spirituality and tagged Friends, John the Baptist. Bookmark the permalink.