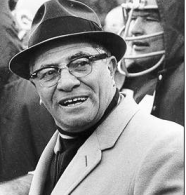 Even named a trophy after him

Shopping Freedom
Twenty special days throughout the long year are ideal for shoppers who like to browse uninterrupted and without the crowds. Whether it’s clothing or grocery, the ease of shopping is made easier at least twenty times a year.  Wisconsin Avenue, Milwaukee’s main downtown street, can conveniently be used for bowling, if you wish to keep your swing fresh. The younger crowd can skateboard. There is no worry about traffic or even pedestrians for that matter. A rolling bush down the main drag would make for a great western movie opening.  Who would provide for such tranquility for these days? Who would think of assisting others in such a serene way?

The Vengeful God
Our God, Vince, has donated these twenty precious days to Wisconsin folks. Our God, Vince, is lessor known than the other God, except on those given days. On those days our God, Vince, seeks to destroy the enemy making the Old Testament God look like a wimp. Our God, Vince, takes no prisoners and exhibits no mercy. His followers were taught that success is only found in total annihilation.
Perhaps that is why those who adore him empty city streets and malls during those precious four hours on Sundays. The taverns and homes occupied by these cult followers are intently quiet for some duration only to loudly roar during the times when an unusually shaped object is either thrown or given to a fellow disciple.  Many of the people observing this action are at least two times larger than the other God intended them to be but what else can happen to one’s body during twenty devotional days of doing nothing.

Generations of Salvation
Unlike the other God, our God, Vince, has had many incarnate sons over the years. First, there was Bart who proved to be almost as great as his Creator so he needed to be reduced to a car salesman in some southern state.  Then there was a Zeke and a Scott, a Lynn, a David, a Randy and a Don, a Brett.
Oh, wait! Brett was favored as much as the car salesmen. Revered from every Wisconsinite’s mouth for years. No ill was ever linked with this especially gifted son of the Creator. Until, until the son decided to take half his inheritance and retire and then not retire and then retire and then not retire. Disdain entered those same mouths as quickly as the first snow falls before Thanksgiving.  After
becoming ignored and forgotten, our God, Vince, turned to the ignored and forgotten Aaron who turned out to be better than both the car salesmen and the retiring, retired guy. Salvation is ours once again in Wisconsin. The faithful, remaining son remains.

Obsessed
What word is stronger than “obsession” to describe those who isolate themselves in taverns (now called “Sports Bars”) and living rooms with televisions the size of their beds? “Consuming passion” would be a positive expression, can’t use that one. “Addiction” is overused so let’s just stick with obsession.
Those of us who have a life are truly grateful for these shopping and eating days. These days are not a lot over the course of a year’s time but during these times great comfort is found in knowing that the obsessed are all safely in one place.

A Roman Catholic priest since 1980 and a member of the Society of the Divine Savior (Salvatorians). www.Salvatorians.com. Six books on the Catholic church and U.S. culture are available on Amazon.com.
View all posts by Rev. Joe Jagodensky, SDS. →
This entry was posted in Spirituality and tagged Green Bay Packers. Bookmark the permalink.