Jesus bent down and began to write on the ground with his finger. But when they continued asking him, he straightened up and said to them, “Let the one among you who is without sin be the first to throw a stone at her.” Again he bent down and wrote on the ground. And in response, they went away one by one, beginning with the elders. So he was left alone with the woman before him. Then Jesus straightened up and said to her, “Woman, where are they? Has no one condemned you?” She replied, “No one, sir.” (Gospel of St. John)

(whispering) I have a secret to tell you. “Publisher Clearing House” gave me their winning numbers. If you have a pen handy, you may wish to…

If anyone begins a sentence saying, “I have a secret to tell you,” please kindly smile and quickly walk away. If you tell a secret then it is no longer a secret. And I love it when they end by telling you, “Please don’t tell anyone.” When they just did.

Secret is our word but the churchy word is “mystery.” I even say it every time I have Mass, “The mystery of our faith.”

“Why am I still alive?” asks the eighty-nine old as though “Father” has the answer. “What’s my major?” ponders the twenty-year old after a parental investment of over $180,000 in tuition.

Jesus writes not once but twice in the sand of the adulterous woman with how many outstretched arms tightly holding their-soon-to-released stones.

There are many guesses about what Jesus wrote if you look online but none are answers. That’s what makes it so beautiful and so full of faith. I don’t care what Jesus wrote back then. He wrote it for them. If it was about forgiveness then it’s still a message for me as well but it remains unknown; or that churchy word, “mystery.”

As Lent draws to a close, try to define what the words “faith” and “trust” mean to you. If you can even half-heartedly answer them then you have immersed yourself into this wonderful world of mystery.

“Living the mystery, not solving it”

My new answer when people ask me, “How are you doing?” is to say, “I’ll tell you tomorrow.” Because tomorrow I’ll know more about the yesterday that I lived. That’s living the mystery, not solving it.

Your son is arrested for drugs and your daughter changes religion. The immediate question you ask both of them is, “Why?” Wrong question. Always, through your conversations uncover the “Who” question. “Who are you?” It sounds psychological, and it is, but it is also the full of the faith stuff. It is the most asked question of Jesus and he never answered them. His life is a mystery to be unfolded as much as the bread and wine we take today that becomes Him, so we may be a little more like him.

Asking ourselves the “Why” question is the most convenient question due to its laziness. It’s an endless circular cycle of blaming everything and everyone other than…who? The “Who” question simply asks in any immediate situation, “Who are you?” “Who have you become” and “Who do you wish to become?” I think that’s called creation and recreation – and examined during every Lent of our lives.

Faith and trust. Two bold words that lead us deeper into the mystery of our lives. Always understanding a little more closely our lives and the life in God. The “Who” of our lives is absolutely a personal journey but it is each time honored and celebrated as family, as a community of faith. Who transforms the bread and wine into the Body of Christ? We all do. My hand is not a magic wand. It is the feeble, struggling and sometime successful efforts of our collective faith and trust that empowers me to give you the Bread of Life.

The “Why” and “Who” thing should be reversed. When you unearth your “Who,” you may receive glimpses of your “Why;” of what you’ve done to life and what life’s done to you. I deliberately used the verb “unearth” because this is spiritual stuff, folks. It is each of us and it is always more than us.

What did Jesus write in the sand? Great question for trivia games but very lame for living our lives. What does Jesus write in the sandbox of your life? How can Jesus stop you from asking about the “Why’s” and lay bare before you the “Who’s” of who we each are. Now we’re talking and sincerely living mystery.

(Whispering) Now, if you have your pens ready the winning numbers are…but don’t tell anyone. 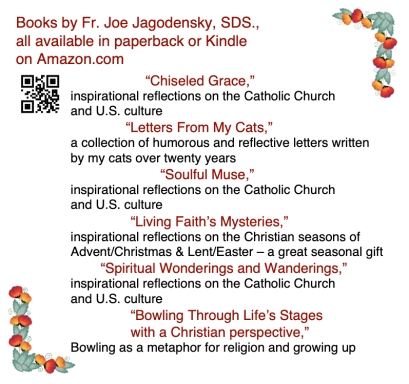 A Roman Catholic priest since 1980 and a member of the Society of the Divine Savior (Salvatorians). www.Salvatorians.com. Six books on Amazon.com.
View all posts by Rev. Joe Jagodensky, SDS. →
This entry was posted in Lent, Spirituality. Bookmark the permalink.