I wonder what happens to wonder as we age? How about the word anticipation? Or, how about that churchy word, awe. If I hear one more young person say, “It’s an awesome movie, you gotta see it” then I’ll lose it. Awesome is when the sun smashes into the earth, then she may rightly use that most awesome of words.

The Christmas season continues to be full of those exciting and inspiring words that are no longer mere words but feelings of something bigger. Always something larger than ourselves.

I will also lose it to those who say, “Been there, done that” as though boredom is now the order of their boring days. Or, equally vulgar is, “Same old, same old.” Said twice as though the first old just got older. And, the worst of all is, “It is what it is” as though resignation is their only recourse. Sad Christians, if they are even Christian anymore. Because Christianity is nothing and empty without those feelings of wonder, anticipation, and awe.

If you have children or grandchildren then you’re able to live those feelings through them. But what about your own excitement? Where do those three words continue to feel their way into your life? My spectacle is like a book with several chapters – all intended to capture the attention and devotion of a child.

Chapter One. Raised in the ’50s when the Iron Curtain was an imaginary and exaggerated fear, our home had its own iron curtain on Christmas Eve. Although only made of cotton, it still kept us from one place to the other. The “other,” in this case, was the decorated Christmas tree in our living room.

To this day, I have never decorated a Christmas tree. I’ve always had “people” to do it for me.  “People” in those days were my older brother and two sisters. Along with my parents, it was their job to prepare the tree while my younger sister and I were forced into Russia, aka grandmother’s house. (Sorry, grandma!) Those forever few hours tortured us wondering what would be under the Christmas tree and if it would shine and glimmer the way it did last year.

Chapter Two. The telephone call from the free world finally rings to Russia, and we are permitted to return to our homeland. Darkness and cold descend upon Manitowoc, Wisconsin. My grandmother has my little sister and I carry her wicker laundry basket full of gifts to the waiting car. The drive home finally arrives. (About ten minutes in real time but to a child, an infinity.)

When we arrive home we see the four separate letters my dad assembles and lights up each year on the front of our house. “Noel.” (He said he always wanted to spell “Leon” but thought the better of it.) Now this yearly dramatic ritual continues with even more suspense. Ritual, by the way, is the repetition of something to firmly fix within you something important. Repeated in real time, but recreated in aging minds ever since.
Chapter Three. We need to change into our pajamas but to do that, we need to get upstairs which is through the living room now blocked by the iron curtain. We promise to close our eyes while running through the living room upstairs. (What trust we placed in young people!) I only half-peeked once and have done self-imposed penance ever since. After changing, we need to return once more through this sacred and secretly decorated room. How much time has passed? Way too much for a youngster.

Chapter Four. The ritual continues. (If you thought Advent’s four weeks is long than you haven’t been to our home on Christmas Eve.) We kneel down (right next to the iron curtain) to pray the rosary. All five decades. All said supremely solemn as though to punish two young people all the more. The third decade brings the relief of something different. My younger sister gets to place the child Jesus in the manger crib. It was the gift of the youngest to do this. (I used to do it until she came along.)
The rosary is finally completed, and none too soon. With proud fanfare on all their faces, the iron/cotton curtain is removed, and the majestic Christmas tree lights up our dark living room. Smiles abound. Another Christmas ritual has been methodically and religiously carried out. Not a detail missed. Not a feeling ignored. The mounting momentum, a racing child’s pulse, the anticipation of another Christmas surprise that was really no different from the previous year is successfully carried out.

Chapter Five. The curtain separating us from wonder, anticipation, and awe has been removed and is now ours to savor and enjoy and carry us through the new year. Forever. Or at least, for another year. We attend midnight Mass when it was held at that hour. We return home. My dad eats some gelatin, artificial meat and for the rest, it’s ice cream.

It’s a memory that I hold dear to my life today. It’s those three words I said at the beginning that I pray none of you will ever forget. Feelings that define who we are Christians in our prayers and relationships.

Because of my age, I’m now considered a senior priest. So am I able to say along with Scrooge, “Humbug” because of the this’s or that’s in my life or the this’s or that’s of someone I like? Is that childhood Iron Curtain truly now made of iron instead of cotton? So am I now able to close with the antithesis and reverse of Advent, Christmas, and our beautiful Christian faith? “Been there, done that.” “It is what it is.” 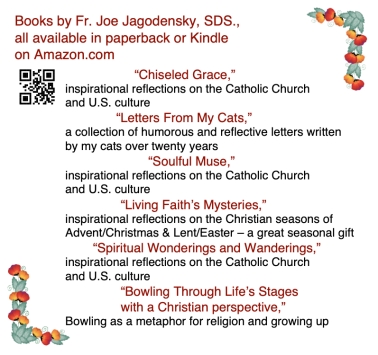 A Roman Catholic priest since 1980 and member of the Society of the Divine Savior (Salvatorians). www.Salvatorians.com. Serving as Administrator, St. Catherine of Alexandria, 8661 N. 76 Place, Milwaukee, WI. 53223. www.stcatherinemke.org. Six books on the Catholic church and U.S. culture are available on Amazon.com.
View all posts by Rev. Joe Jagodensky, SDS. →
This entry was posted in Advent, Christmas, Spirituality and tagged Advent, Christmas, Holidays, Surprise. Bookmark the permalink.