I’m at a T-Mobile store waiting for my order to be complete, and the manager approaches me and says, “I hope you don’t mind, but you look just like Fred MacMurray…when he was older.” He gets the internet, and I could see the resemblance. I was holding out for Brad Pitt, but instead I got Fred.

The Church uses all kinds of phrases to remind us of our unity – union with God, oneness in Christ, the community of faithful believers, one heart/one body, sheep following our Great Shepherd, the one vine and it branches, and how many other similar statements about being together.

Wikipedia, the Gospel of the internet, tells us that, “Six degrees of separation is the idea that all living things and everything else in the world are six or fewer steps away from each other so that a chain of ‘a friend of a friend’ statements can be made to connect any two people in a maximum of six steps.” Please note the word, “maximum.”

Ummmmm. Interesting. So that person you passed on the street, that person who cut you off in traffic, that person at Mayfair Mall that smiled at you, that obituary you read but didn’t recognize the name… We are all connected to all those people. 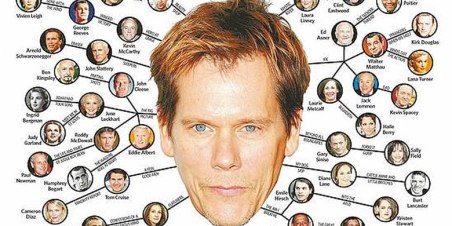 If you don’t believe me and enjoy watching movies just play the “Kevin Bacon Game” with a friend or two. You will find out for yourself how that separation of “six” is quickly erased and reduced to two.

Easter hope is about connections but we usually think about the connection in a personal way; between God and us. But when and where else do we met Jesus? In church, of course, but we get to know who Jesus is through each other.

I was new to Christ King Parish, and after Mass a couple approach me to say, “We heard you’re from Manitowoc, and we saw your last name. Your sister taught both of us at St. Andrew’s School.” My sister was a nun then, and it was true. So my meeting them and they know my sister adds up to how many in between connections of people I don’t really know but are now connected to. And, how many degrees of connections did I subtract during my years on the radio? And, now we have Facebook, for better or for worse.

Each of us, I’m sure, has connecting stories to tell about narrowing that “six degrees” to one or two or even zero. We keep saying how we know someone who knows someone else in Milwaukee and conclude that it’s a “big, little city.” I bet the very same connections are made in New York everyday.

You may not believe this, but we’ve all met Jesus. Every single one of you has met Jesus Christ. In that stranger who held the door for you, in the smile from that Mayfair Mall person, stopping at a crosswalk on North Avenue for the mom and her baby to cross (it’s actually the law but you wouldn’t know it), in the person at work who falsely gossips about you. Yes, even the last example is meeting Jesus as he met Judas.

We’re in this life truly together because of six simple people connecting our lives together in what we call in the Church, the “Body of Christ.”

You may not believe this, but I’ve met six presidents. Eisenhower, Kennedy, Johnson, Nixon, Ford, and Carter. It’s true. When John Lindsay was running for president he spoke in downtown Milwaukee. Afterward, we went to the old Schroeder Hotel for a drink. Sitting at a table is Theodore White and Walter Cronkite. We introduced ourselves and thanked them both for their work as author and anchor. Another connection was made, narrowing my maximum of “six degrees” to a much lower number.

Christians believe our unifier is Jesus Christ. Other religions have their own unifier. But we all have the same hope and the same dream of unity and oneness.

If you don’t believe me, don’t ask the T-Mobile guy, just ask my look-a-like, Brad Pitt.

A Roman Catholic priest since 1980 and member of the Society of the Divine Savior (Salvatorians). www.Salvatorians.com. Serving as Administrator, St. Catherine of Alexandria, 8661 N. 76 Place, Milwaukee, WI. 53223. www.stcatherinemke.org. Six books on the Catholic church and U.S. culture are available on Amazon.com.
View all posts by Rev. Joe Jagodensky, SDS. →
This entry was posted in Easter, Spirituality. Bookmark the permalink.