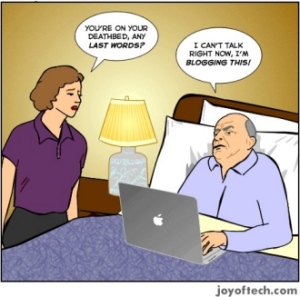 You’re on your deathbed and available family and friends made a promise to be with you until the end regardless how long that “end” becomes an “end.”  The first few hours are the easiest because surrounding folks are getting to know the place, the nurses and even luckier to maybe meet the doctor.

Those hours pass and new hours await surrounding family and friends.  A chaplain visits and it’s usually the eldest daughter who shares a brief history of a much longer life and then slowly the others chime in with adjectives and even more adjectives describing the Noun that lies on the deathbed.

“Caring,” “Compassionate,” “Kind,” “Considerate,” “Generous,” “Loving” and numerous others causing the chaplain to wonder what hope is left in this world when the Noun departs.  It’s a common belief that hearing is the last of the senses diminish so said family and friends who read the same article are now filling the deathbed Noun with accolades.

What does a chaplain discern from this litany of adjectives?  Is this expressed sentiment making up for lost occasions when the Noun could have thanked them for the compliment or is it this remaining time before those “lost times” become truly lost?  “How much is true?” a chaplain thinks wondering if this is a saint-in-waiting-two-miracles or deep affections wishing to be voiced one last time.  But what about that last Thanksgiving dinner when the deathbed person ate the last piece of pumpkin pie and threw away the wishbone that the granddaughter wanted?  Not repeated, out loud at least.  Not mentioned but remembered is that truth speech the Noun gave to the wayward son.

All the best of this Noun, whether real or hoped for comes forth in the long hours of a dying person with a strong heart.  Those family members unable to be in that room are conjuring up their own memories with many of the same superlatives.

End of life seems to bring out the best (or wished for) in a dying person on the deathbed.  If only the person after a few hours of listening to all of this could rise for a moment and say, “This is great folks but would saying these things during my life be the worst?” and then return to the quiet, sedate state.

My memorable “end of life” family lasted for five days.  Her four daughters diligently stayed until mom’s final breath.  The first two days were the above sentiments.  June Cleaver had nothing over this woman.  The last three unfolded a picture of a full person – helpful but sometimes failing, loving but distant, compassionate but often withholding – and more of the same. Everything was said in a spirit of love, admiration and loads of laughter after a family story was shared.  I hope that mom heard the whole thing because she would have agreed with her daughters.  Hers became a recollection of a full life without editing. That’s a real lived life.  That’s a life worth celebrating as the Noun now becomes a Person, loved and remembered on a bed called death.

A Roman Catholic priest since 1980 and member of the Society of the Divine Savior (Salvatorians). www.Salvatorians.com. Serving as Administrator, St. Catherine of Alexandria, 8661 N. 76 Place, Milwaukee, WI. 53223. www.stcatherinemke.org. Six books on the Catholic church and U.S. culture are available on Amazon.com.
View all posts by Rev. Joe Jagodensky, SDS. →
This entry was posted in Spirituality and tagged deathbed. Bookmark the permalink.