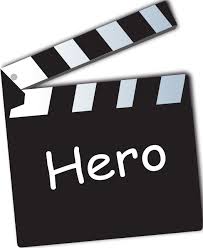 A “hero” in action films always works alone and it always a man, sorry other gender.  At least four minutes into the film a damsel needs to be killed, we don’t need to know who she was but it sometimes helps the hero’s motivation.  Now that a conflict has been identified the hero’s job is clearly set for the audience.  (If you’re watching a DVD you can make popcorn now, if in a theater than you can stop fidgeting because the plot’s been plotted out for you.)

Seemingly acting alone, hero sets out to right a wrong with whatever wrong methods he can use to make it right.  The obstacles before hero in this two hour journey are insurmountable which makes viewing exciting.  Law enforcement of all stripes need to bungle up hero’s journey by following the rules and missing clues that only hero uncovers.  Early in the film hero may be eating pie, minding his own business in a cafeteria and exhibits an idiosyncrasy that can reoccur at times throughout the movie to show he’s still one of us although he is the projection that none of us will ever be.

He’s able to shoot more bullets than a service revolver can release and fight a bunch of men to get past four steel doors to reach the culprit in a cinch using quick movements we cannot see or off camera to keep the movie’s PG rating.  The culprit, by the way, is usually Eastern European because U.S. folks don’t care about that region anyway so why not have the bad guy have a bad accent and want to destroy the world by killing the damsel mentioned earlier. (A woman stands in the way of world destruction?  Interesting.)  Hero does this whole movie without help from anyone except the obligatory geek friend who offers technology and strategies that we don’t understand but accept. Hero uses his cell phone, a lot in movie these days, throughout the film without a dying battery unless dying battery helps the plot.  Hero travels from country to country in search of clues leading to culprit with great ease, unlimited passports and lots of cash in spite of his lack of employment. (Hero is most often a “former” someone in some enforcement capacity, misunderstood, unfriendly but always attractive.)

Hero’s past can be vague or relevant – it depends on the storyline.  He’s either divorced or his wife died of a disease none of us can pronounce.  His children never see or hear from him but he loves them dearly.  (In other words, hero is simply a misunderstood adolescent in an adult body with a gun in an action film that rarely exceeds two hours.)

Bad guy always has a middle-bad-guy who stands between hero and Bad guy.  So, hero needs to chase middle-bad-guy through heavy traffic in either a BMW or Audi.  Multitudes and I mean multitudes of drivers are driven off their path in an effort to have hero meet and kill middle-bad-guy before reaching Bad guy.  This can take a long time because the chase involves tunnels, four lane roads and jumping into the other four lane road in the wrong direction which sets “multitudes” of more cars and especially big trucks to collide, crash and burn.  Slowly during this chase hero needs to receive head wounds to show risk and sacrifice and sometimes even a bullet in his stomach which apparently someone can live for hours and hours with.  Hero may give a slight sigh or in movie these days provide a self-conscious statement that makes us laugh but never deters him from getting middle-bad-guy.

Middle-bad-guy soon dies a horrible death but not before giving hero either the credit or disdain that hero deserves.  With middle-bad-guy out of the way, hero can now proceed through those four doors and countless guys in suits who either die, made unconscious or given serious head injuries.  Finally Bad guy is alone with hero and they talk way too much about their individual goals, aspirations, favorite foods, women they love and shoes they like.  Bad guy may even offer hero a drink knowing he is about to kill Bad guy.  Bad guy’s death is either quick or slow depending on the film’s remaining time, usually 12 minutes.

At the end of the film, hero is alone again gazing at a picture of his loving children in his wallet that he doesn’t support or sees and exhibits the idiosyncrasy the writers concocted for him.  The movie can now easily conclude in the same cafeteria with a piece of pie.  There is now no mention of the judicial system, the mess of cars and bodies that need cleaning up and there is no mention of the “multitude” of AAA, State Farm, Allstate insurance claims that need to be claimed by folks on the their way to work when a semi suddenly bursted into flames.  “Oh, you were with that group,” the agent would say.    Law enforcement is not heard from again unless it’s an alcoholic with only a year left on the force who secretly helped hero during the film.

Such is the hero film formula that’s been used for numerous years with numerous stars playing the same role.  Too bad that our U.S. “hero” isn’t a community of people that says it respects the wealthy but is always aware of the less fortunate and that the “hero” in our society is “us” working together.  Having the assistance of a good geek also helps.

A Roman Catholic priest since 1980 and member of the Society of the Divine Savior (Salvatorians). www.Salvatorians.com. Serving as Administrator, St. Catherine of Alexandria, 8661 N. 76 Place, Milwaukee, WI. 53223. www.stcatherinemke.org. Six books on the Catholic church and U.S. culture are available on Amazon.com.
View all posts by Rev. Joe Jagodensky, SDS. →
This entry was posted in Spirituality and tagged action movies, hero. Bookmark the permalink.