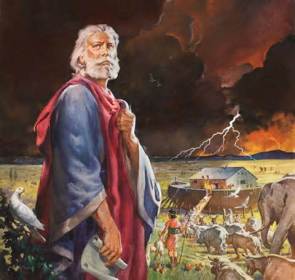 An older adult will never, ever begin a sentence with, “if memory serves me correctly.”  Just don’t hear it.  Because they know better.

And so it goes.  “If memory serves me correctly…”

God has a memory we learn today.  He’s decided to destroy the world and start all over again.  He’s decided to flood those living and replace them with new blood.  His memory has reached its limit and it was time to create a new memory.

God REacted.  God did not act.  God overreacts and destroys the world much like the United States REacted after September 11 with our invasion of Iraq.  We REacted instead of acting.  Both us and God were impulsive and we’ve both paid the price.

God apologizes to us.  (Did you ever think you’d hear a sentence like that?  God apologizing?)

Instead of telephoning us or sending us a $2.25 Hallmark card to make amends, God paints us a rainbow in the sky; a clear, visible sign to show us that hope is worth hoping for, that trust is earned and then utilized and that strength comes from our inner beings – not through any outside REactive force.  A rainbow.  A simple rainbow to illustrate the binding covenant provided to us by God.

He tells us, “When I bring clouds over the earth, and the rainbow appears in the clouds, I will recall the covenant I have made between me and you and all living beings, so that the waters shall never again become a flood to destroy all moral beings.”

God REacts in the flood but then ACTS in the birth of His Son.  God paused for quite a long period of time by remembering the past and then thinking of the future by sending His only Son.

God’s covenant is now the bedrock of our Christian faith, the cornerstone from which all religious beliefs flow.  It is a rainbow of trust, an apology with an eye toward a future filled with hope, joy and peace.

Can we do any less?  Lent is a wonderful time for forgetting the misdeeds of the past and looking forward to God’s promised Kingdom.  In Confession, after offering up their sins, many people say that old phrase that concludes a confession, “and forgiveness for all the sins of my past life.”  It is said as though those sins were never forgiven, those sins are not forgotten, those sins continuing to live and breath within you.

It’s over.  Your past sins are forgiven, the beauty of the sacrament propels to today and to tomorrow. We are forgiven people.

God’s given us a covenant of love, His Son.  God’s given us a commitment to be with us through all times of life.  God may have forgotten about the flood episode but he still remembers it and possibly even regrets it.

What can we forget about but still remember?  What covenant can we hold onto in a faithful trust represented by a simple rainbow after a rain?  There is only one covenant that I know of.

A Roman Catholic priest since 1980 and a member of the Society of the Divine Savior (Salvatorians). www.Salvatorians.com. Six books on Amazon.com.
View all posts by Rev. Joe Jagodensky, SDS. →
This entry was posted in Lent, Spirituality. Bookmark the permalink.