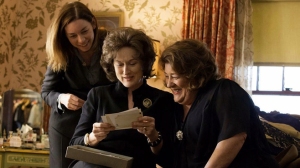 Two nights ago I watched the 20 minute end to a movie.  I heard that movie was good and watched it, well, at the end.  You can do that kind of stuff with cable these days.

Tonight I got to watch the whole movie and when I got to the part that I had already seen I continued watching.  When the credits started to roll I understood the partial ending I saw earlier.

It’s like a hidden curtain that we’d all like to peek through.  We want to know but we don’t want to know.  I guess it’s a control thing or perhaps how much money we should save for our final ending.  A book on her lap in bed was how one person was found.  A nap that lasted forever is another.  A random gun shot is another.  Death scenes are endless in their configurations.

One scene, in the completed movie I watched, had a mother at her wits end tell her 14 year old daughter something like, “Just die after me.  I don’t care how screwed up your life becomes.”  Now there’s a mother’s wish for the final third of her life.  Just wait for me first.

As we age we know the ending began with our beginning.  It’s a bargain we never made but one we live with.  “Live with.”  What an interesting phrase for what we call a gift, “life.”

There are only three acts in life – me, myself and I.  Sound selfish?  Not quite.

The first act of “me” is completely about being nourished and cared for because we are not able, capable ourselves.  We buy that.  Life’s second act is the main event of “myself” incorporated and a part of what can become “our” added to “selves.”  It is our engagements, commitments, investments and risks all taken for the sake of anyone other than “myself.”  What a grand act the second one can be.

Life’s third act is the personal appropriation of our efforts.  It’s not the laurel or the wreath placed upon us but a satisfying smile upon our second act and a renewal that it was worth the effort even if the efforts proved fruitless, as least in our estimation.  Perhaps smile is to mild a word.  Peace and contentment may be more fitting for those who made the worthy effort to make the second act of life, well, worthy.

My finally watched, completed movie has all the characters gather for a large meal and then drive off, one at a time, leaving the obnoxious mother to herself.  It was a sad ending.  It was good I saw the ending first because it made acts one and two make sense.

I don’t want to harbor on my third act of life.  I know it’s going to happen but I hope to concentrate on act two, while it lasts.  Standing ovation?  I doubt it, but a small hand clap would be appreciated while my final credits roll.

A Roman Catholic priest since 1980 and a member of the Society of the Divine Savior (Salvatorians). www.Salvatorians.com. Six books on Amazon.com.
View all posts by Rev. Joe Jagodensky, SDS. →
This entry was posted in New Years Eve, Spirituality. Bookmark the permalink.