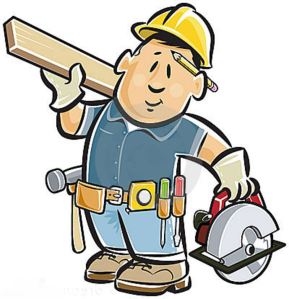 The problem is there and I’ve observed it every day.  Walking passed it each day I confirm to myself that there, indeed, is a problem.  “Yep, there’s a problem,” says my Masters Degree mind.  I’ve lo0ked online and the problem is real.  I’ve examine YouTube videos and found solutions to my problem but only if I take a week off of work, buy lots of stuff and hold the YouTube video in front me as I proceed to correct the problem.   (Rewinding is an important feature when using YouTube videos during home improvement.)

Being a priest I tried prayer but the problem was still there as I walked passed it.  The patron saint of lost causes must have been busy with others like myself.

It was a truck at a stop sign with an attractive sign that told me more about him than my car told him.  He’s a handy man who’s decided to go out on his own, he tells me after taking my call and only waiting two days.  “Business is bustling,” he shares with me as we shake hands.  I show him the problem and assure him that I’ve watched all the YouTube videos about it and could assist him at any stage if he felt is necessary.  The look he gave me was polite and priceless in the “nothing you could share part will fix what I see here.”  Yet with my all stature and education, I felt it important to convey to him my stature and education in spite of the fact that he needed to be standing in front of me with his truck blocking my car.

His tools were many and his small talk was even smaller.  I tried the stature approach once more and tell him what I do for a living and his response is, “Good for you.”  I was also hoping from him further explorations into the matrix of my complex job but he simply opened his box of tricks containing items I vaguely remember seeing on YouTube videos.

One hour.  He told me the charge before he began.  One hour.  One of his against at least five of mine for the job that needed to be done.  He says, “cash or credit?” and I know that cash is the better choice but wondered about more.  When giving a tip, I believe that if you can give 10.00 then you can give 20.00.  So 20.00 it was above his normal charge.  He thanked me as we shook hands and he was off to his next Masters Degree job.

After he left I sat down, relieved that it was finally fixed.  The month I denied it, the month I thought about it, the next month I prayed about it and the following YouTube videos month.  My fours months was accomplished by him in one hour.

“A jack of all trades and a master of…” has always intrigued me.  I have the one and his has the many.  How he got his and I did not mystifies me.  It was a truck at a stop sign.  A GED guy?  I don’t know.  A loser working for employers?  I didn’t check.  For four months I could have been considering many wonderful and ponderful things (I know it’s not a word but it sounds good) but in the end I needed a handy man, a very nice man who did his job in efficient time and now I’m 10.00 dollars less.

But the problem?  The problem’s been solved.